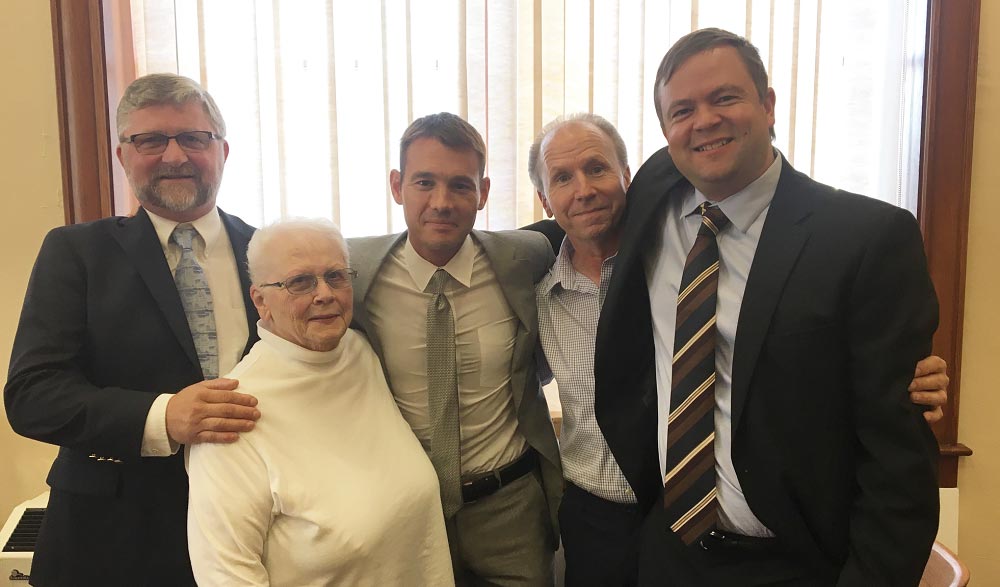 A jury honored the memory of their 80 year old husband and father with a unanimous, record setting medical malpractice and wrongful death non-economic damage verdict of $10,000,000.00 on September 19 in Dubuque, Iowa.

This was a case in which metastatic cancer required surgery to remove his bladder, and ended up resulting in a bowel leak and sepsis.  These conditions were treatable and fixable with an additional surgery.  The additional surgery was scheduled, and during the negligent induction of anesthesia, Mr. Pellock vomited and aspirated stomach contents into his lungs and died later that day of secondary drowning.  He drowned in his own vomit because the nurse anesthetist, who was soon to retire, failed to protect and then clean out Mr. Pellock’s airway after he paralyzed Mr. Pellock with drugs and left him defenseless.  The anesthesiology provider failed to recognize that Mr. Pellock had just been fed an hour earlier and had a full stomach.

“I am incredibly proud to be the trial lawyer for Joanne and Mitchell and proud that justice was served for their husband and father today,” said Nick Rowley. “All lives matter, old lives matter.  Even though life expectancy instructions only gave us 7 ½ years of damages, the jury found this family lost an important and valuable life, experienced extreme hardship, and that the medical professionals were negligent and wrong in the care of an 80 year old man who had finally beat cancer.”

“We are guaranteed the right to life, liberty, and happiness in America.  If life is negligently taken away, we need to put a brutally honest value on it, and it shouldn’t be cheap,” Rowley went on to say.

At the start of the trial, the defense offer in this case was $0.  The defense’s medical experts attempted to convince the jury that they felt this was a case in which the complications were a risk of surgery.  Rowley was able to discredit those witnesses and convince the jury otherwise.

“Fortunately, a good hearted and fair Iowa jury sided with Joanne and Mitchell and awarded them every penny they deserved,” Rowley stated. “In the end, while it won’t bring back their loving husband and father, they were able to receive a $10 million verdict for his wrongful death.  ‘We are certain the corporation and its insurance company will appeal and delay because that is what the defense industry does, but this is a big victory for Iowans, medical patients, and families across the entire country.  Old lives matter.”