JUSTICE FOR ALL As a trial lawyer, he’s won more than $1 billion for underdogs everywhere 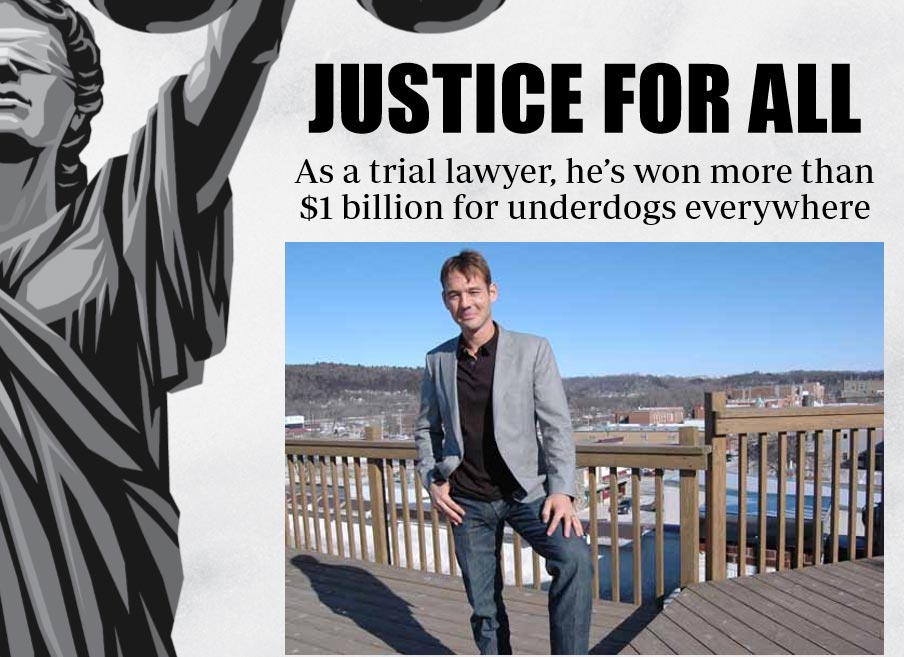 The plane was on the ground for all of 10 minutes. “I’m Aria,” the pilot said, welcoming his passenger aboard the turbocharged aircraft whose glass cockpit was outfitted with digital displays presumably reverse-engineered using captured Batplane technology.

Aria — whose last name wouldn’t be revealed until the flight back to the Jefferson Municipal Airport — had been dispatched by his employer to retrieve me, and me alone, on this cold February morning. If he should lose consciousness for some reason at any point during the trip, Aria casually explained, I was to pull the red lever above us to activate the airframe parachute system. And with that, we were en route to his boss, a charismatic millionaire 20 times over whose empire, constructed atop human pain and suffering, took less than 15 years to build. Aria was surely taking me to visit a guy who inhabited some kind of secret volcano lair on an uncharted island. Come to find out, Aria’s employer actually inhabits two islands — one in Oceania and one in the Mediterranean.

But Aria’s boss is no evil super-villain. He’s one step up: A personal injury lawyer. Nevertheless, the origin stories bear a striking similarity — here was a fast-talking kid with an unstable upbringing who wound up being expelled from virtually every school he attended. When he finally left his quaint Midwestern town — in this origin story, the town just happens to be Jefferson — he left angry, and in possession of the kind of intellect that all but guaranteed he would be able to build something from nothing. Whether that something would be for good or evil,
however, was anybody’s guess.

And now as Aria piloted the Cirrus SR22T toward a wooded river valley below, it would all become clear. With its micro-breweries, bed and breakfasts, organic food co-op and that eagle nest with a webcam on it, Decorah (pop. 8,127) is about as close to Sherwood Forest as you’ll find in Iowa. Attorney Nick Rowley, who has accumulated a personal net worth of $20 million since he left Jefferson as a troubled teen of 17, has become Robin Hood. Bounding from his black Hummer H1 at Decorah’s municipal airport, Rowley greeted Aria with the kind of massive embrace Robin of Locksley might have once upon a time reserved for Little John. “You know that plane has a parachute,” Rowley, 39, informed his guest.